Could a new polymer make a difference in your office? … Even the most successful oddsmakers might have a tough time predicting which side is poised to win two familiar workplace wars: The suddenly simmering “sit-versus-stand” debate and the “open-or-private-office” territory tussle. The first pits the health and productivity benefits of standing versus sitting while at your desk, and the latter attempts to balance how working without walls can enhance teamwork and efficiency while preserving privacy.

Interestingly, the common desk chair finds itself a key player in both dramas. And thanks to some clever engineering and advanced materials science, American furniture-maker Steelcase has given proponents on all sides of both deliberations—no matter their size or shape—a new and comfy place to sit while presenting their respective arguments.

Back in 2008, Steelcase VP of Global Design and Engineering James Ludwig wondered how office furniture could adapt to a dynamic, open-office-style workplace where employees wouldn’t likely sit at the same desk all day. As he explained in an interview with Fast Company, transitioning from one workspace to the next shouldn’t require workers to “decode your environment and figure out how to personalize it.”

To that end, Ludwig had a vision of an office chair that would rely on material to replace many of the moving parts (basically, “the machinery”). His chair would, in essence, dynamically form to each user; only a height adjustment would be necessary, and the rest of the variables tied to a “fits-just-right” experience (like how you’re positioned front to back or where the chair’s center of gravity naturally seats itself) would come courtesy the chair’s composition.

The problem was, back in 2008, no such material existed that could cost-effectively realize Ludwig’s dream. Carbon fiber was the first choice, but manufacturing Ludwig’s design with it would’ve yielded a product far too expensive to practically offer to a mass market. So his engineering team temporarily shelved the project.

Eight years later, though, the Steelcase engineering team came across an ingenious way to leap the cost hurdle: They developed a new polymer that acted like carbon fiber, but was easier to manufacture and cost only about one-quarter as much.

Steelcase’s new high-performance polymer (which it’s pursuing a patent on) allowed Ludwig’s team to reduce the number of discrete parts in a fully adjustable chair from 200 or more to roughly 30. Marketed under the name brand “SILQ™,” the chair can trace its design roots from multiple directions.

“We took inspiration from aerospace, the motion of a high-performance prosthetic leg and sculpture, among other things, to understand how the combination of advanced materials and shape could create a simple system that is incredibly thin, extremely strong and highly responsive,” Ludwig explained in a news release announcing SILQ. “The way SILQ is shaped, what it is made of and the way it performs are inseparable. We pushed the boundaries of materials science and the material became the mechanism.” 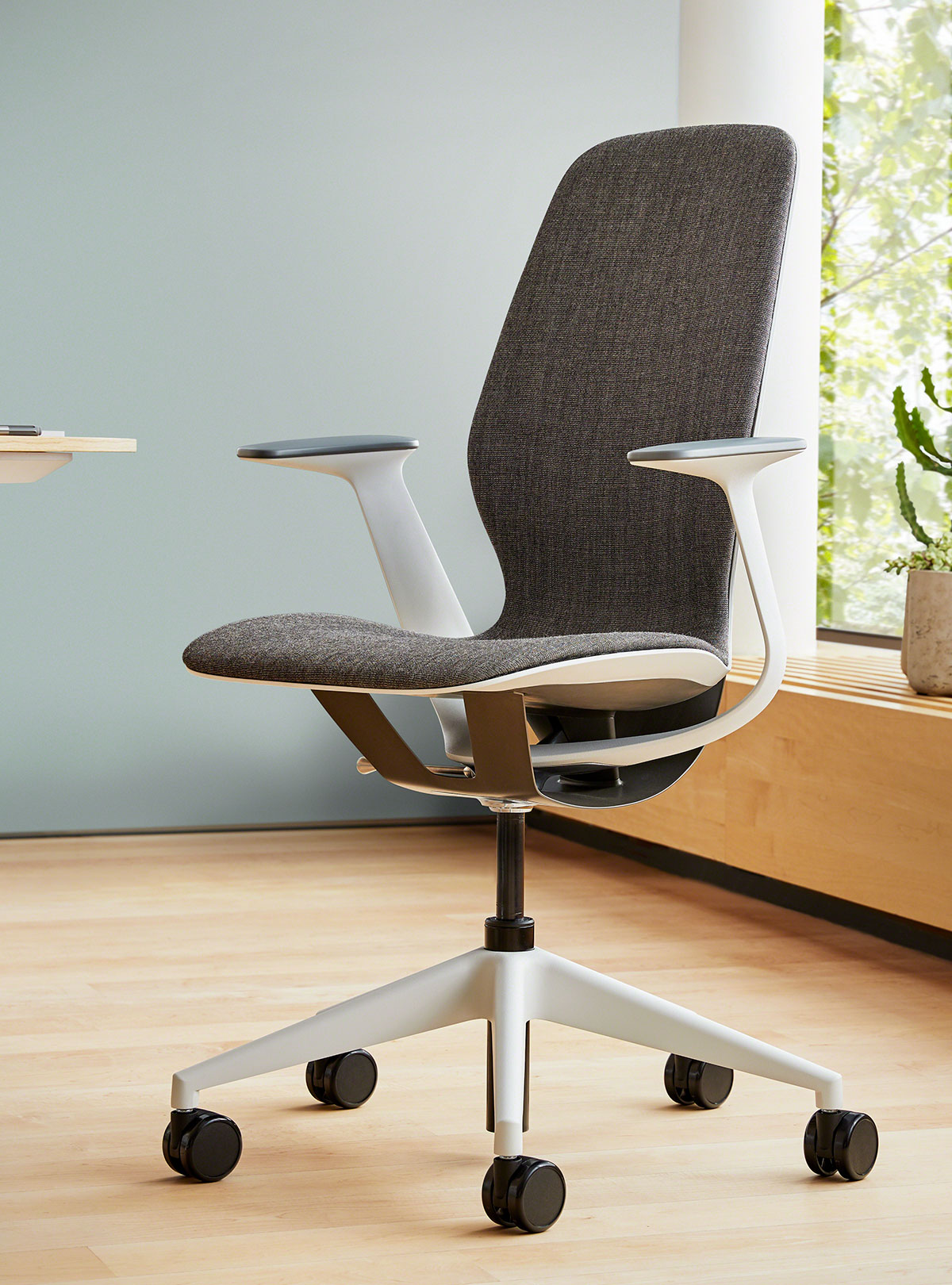 The end result is a comfortable seating experience as employees move from chair to chair in an open space environment or alternate between standing and sitting at their desks. Each worker needs only change a SILQ’s height adjustment; the chair takes care of the rest.

While Steelcase closely guards the precise composition of its new material, Ludwig said that it can be manufactured about as fast as injection molding, meaning that the company’s SILQ chairs can be mass produced relatively quickly (and in far less time than a carbon fiber chair built to the same specs would take to manufacture).

SILQ represents just one of the most recent process and materials engineering innovations undertaken by Steelcase. In 2017, the company began a partnership with MIT centered on a proof-of-concept for 3D printing of furniture components cut by trimming material out of a special “goo” rather than applying it layer atop layer. By using the semi-solid gel as a support mechanism for each 3D printed structure, a component made of hard plastics or flexible rubbers can be printed in minutes rather than the hours it would take with traditional 3D printing.

Steelcase has every incentive to continue to its innovations in materials science: The office furniture market is worth $27 billion, meaning if Steelcase can casually slide more of its new $960 SILQ chairs under workers, it’ll be sitting pretty in a comfortable, smartly engineered position.

Now that they have this new carbon-like material, what might Steelcase create with it next?

Joseph Gaitens is a contributor to the Innovation, Inspiration & Ideas blog. Based in the Research Triangle area of North Carolina, he serves as a freelance copywriter and brand communication strategist for clients that range from small start-ups to Fortune 100 companies. Joseph’s experience covers a broad spectrum of industries, from high-tech and manufacturing to healthcare and consumer products.

See All Posts By Joseph

Scientists at Rutgers have developed catalysts that can convert carbon dioxide into plastics, resins, fabrics and more. Since carbon dioxide has been identified as a major cause of… Read More

Edible water bottles could be in your future thanks to London-based startup Skipping Rocks Lab. Their first product, Ooho, makes you rethink “water on the go.” The idea behind Ooho… Read More